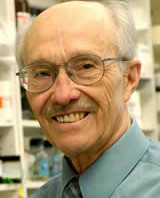 The research in my lab has centered on a model system for looking at nonhost resistance, in this case the resistance of pea tissue against a challenge by a bean pathogen. Alternately, this process is compared with the same tissue challenged by a related true pathogen of peas.  We developed an assay on pea endocarp tissue that develops total resistance within 6 h to an inappropriate fungus such as the bean pathogen and susceptibility to the pea pathogen within 24 h. The fungal components that elicit the defense response, represented by 6 response genes from peas, have been defined and include the carbohydrate, chitosan, and the enzyme DNase.  We have intensely studied the properties that enable these elicitors to enter the plant cell and activate the response genes, as well as the functions of these genes.  The genes appear to become activated with changes in the plant chromatin adjacent to the defense genes.   The chromatin alterations include DNA damage and removal of nuclear proteins such as histones H2A, H2B via ubiquitination.  We continue to investigate our explanations of these precise gene activation mechanisms. Some of which have not yet been incorporated into the thinking of some mainstream pathologists.

The defense genes of peas and the elicitor DNase from Fusarium solani used were first cloned by us and thus we have engineered them into potatoes, tobacco or canola to demonstrate their individual disease resistance functions.

The precise mechanism by which the fungal DNase activates genes is especially important to us as we now find that all of the fungi sequenced to date possess a mitochondrial DNase gene that codes for a protein with an N-terminal signal peptide that allows it to be released from the fungal cell and enter the plant cell.  This background knowledge has enabled us to develop commercial products that enhance disease resistance.

Hadwiger, L. A., McBride, P. O., Klosterman, S. J. and Choi, J.J. 2004. Chitosan as a component of the plant’s disease resistance response and as a “sticker” for plant protection by antifungal compounds. In: Advances in Chitin Science Vol.VII. Adenda. Eds: Boucher, I., Jamieson, K., and Retnakaran, A. pp. 1-9.